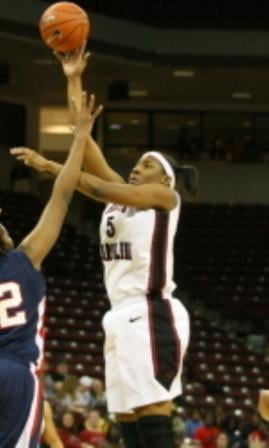 The Gamecock women's basketball team fell short in Kentucky Sunday afternoon, losing to the Wildcats, 71-50. Kelsey Bone led the Gamecocks with 13 points and Charenee Stephens scored 11 points and had 10 rebounds.

The Gamecocks struggled offensively in the first half, shooting just 30 percent. The Wildcats hit 42 percent of its shots. The Gamecocks went into the locker room trailing 36-20.

The Gamecocks made improvements in the second half. Bone scored nine of her points in the final 20 minutes. The defense slowed down Kentucky, but South Carolina made little headway..