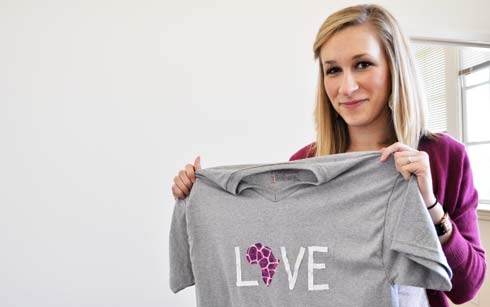 A mission trip to Zambia has given Amy Woodell, a USC fashion merchandising junior, a mission of her own to help widowed women in a slum of the nation's capital.

After completing the paperwork last month to create the nonprofit Clothed in Hope, Woodell, 21, is focused on selling clothing she's designed and made to help fund a center to teach widows in the Ng'ombe compound of Lusaka how to sew.

"Amy has always cared deeply about others," her brother, Mark Woodell, said. "I think her experiences in Zambia have given her a place to focus that caring. I respect how seriously she has thought about the reasons she's getting involved."

After working six weeks at the University of Zambia with Campus Crusade for Christ International and spending weekends in Lusaka's slum, Woodell, who says she plans to move to Zambia after graduation, realized there was a great need in the Ng'ombe compound for her support.

She said Zambian law entitles a widow to 20 percent of her husband's estate, but societal customs strip widows of that and leave them and their children with no means of survival. This weighed on Woodell after her return to the U.S. and inspired her to create Clothed In Hope, where widows will learn financial responsibility by producing and selling their own clothing.

This summer, Woodell will be interning in Ghana at Women in Progress, which does something similar to her idea for Clothed In Hope, but on a larger scale.

For the nonprofit to be successful, Woodell must be diligent, really know Zambia's community and have spoken to people there, said Barbara Leopold, from the Center on Philanthropy And Civil Society at the City University of New York.

"Only then I would say an effort like that would have a chance of having a positive impact," Leopold said.

Woodell sat down with The Carolina Reporter to talk about her goals for Clothed In Hope and her plan for handling obstacles along the way. Parts of the interview have been edited for brevity.

What was the specific moment you remember from Zambia that made you realize you wanted to do something?

I think the first day I drove to the orphanage. It's just a place that I had never seen, even in the papers or anything. I didn't know something like that existed. And we heard the sound of the children just laughing and joyful in this really dark place, and there was such an immense need. I think it was in that moment that I realized I just couldn't walk away unchanged from it.

Your shirts are similar to Global Fund's "Product Red" line from Gap; was that also an influence? What inspired your designs and pattern choice for your clothing?

I actually didn't even think about that at all. I don't even know how I thought of the pattern. It was just originally an idea to send a Christmas gift to all the girls who went on that summer mission trip with me. … I try to keep the fabric choices pretty traditional to what the chitenge fabrics would look like, but still be appealing to, obviously, to people here.

Chitenge is the cultural fabric, I guess, that they use in Zambia. They use it as skirt wraps, and … even different head wraps. It's a really traditional fabric. It's a waxed cotton. They're known for all these different, brilliant patterns and colors and designs in the chitenge fabric. …

Your parents seem very supportive of your plan, but your dad thinks fundraising is going to be one of your biggest obstacles in getting your nonprofit off the ground. He said: "The enterprise is going to have to be self-supporting at some point, like every nonprofit." What is your plan if you don't make the funds necessary to reach that stage?

I think that it's just going to be a major push over the next year of raising these funds. … I do have the funds necessary to go ahead over there, but I do feel that once people can see that this is already operating and it's working and it's changing the lives of these women, that people will want to jump on board. So I don't really see that there's failure in sight, because if there is, quote, failure, then it's just me moving home, getting a job like I would as usual. But right now, I really feel that this is going to happen and I'm making all the arrangements to do so.

Your dad, as well as a few experts on African studies, raised the point that starting this nonprofit is going to be harder than opening up a business in Columbia. Beyond what you saw on your mission trip, what kind of extensive research and preparation have you done concerning your future home?

The best thing has been to get a lot of knowledge from people who are already there and who have experienced a lot of failure, but have also experienced a lot of success in that culture. I've been in contact with three people in particular that just have a lot of really great advice on how to go about succeeding in somewhere that's not quite like Columbia, with the people or the place or anything. …

Where and what is the facility you're planning to build supposed to be?

I want it to be in the heart of the Ng'ombe slum. … It's going to be, at first, kind of a small operation, like five or 10 women. It's just going to be a vocational school so they can learn sewing skills, but I don't want it to end there. I want it to also be life skills training so they can learn about different preventable diseases like waterborne illness and malaria, even HIV-AIDS, just so these women aren't just getting a job, they're also really being able to better their lives and regain a position in society.

You say you want to aid poverty-stricken women and children by building a facility where they can be educated beyond what's available to them. How do you imagine the facility you hope to build in Zambia doing that, especially with the number of nongovernmental organizations that already teach life skills like sewing?

I know in this specific area there is more need than there is help, so I feel like there's definitely going to be people who don't have this help at all. And Zambian society as a whole, I feel like, has been left out. It's not Uganda; it's not Ghana. It's not these places that people normally think of to support and to help. …

You mention on your blog that shipping to and from Zambia has been a difficult situation. What experience do you have in operating overseas, and if none, how will you be getting it?

I have no experience, but I have talked to Larry, who runs Zambia Hope, and their shipments over there have been extremely unsuccessful. They've shipped three different packages and only one has made it, and it made it four months later. So it's scary that really not a lot of materials make it where they need to go. But actually, right now, he's over there and he's going to be doing an experiment for me to figure out how shipping works from Zambia. … If that doesn't work out, there's plan B and plan C, and so we'll just kind of have to take it from there. But I do need to learn a lot more about how people's experiences have been getting stuff in and out of the country.

How do you plan to arrange and oversee construction of the facility? Through an NGO or another group, like Larry's organization [the Zambia Hope orphanage]?

I know that buildings already exist in this place, it's just like concrete buildings. … I don't foresee building, necessarily. I think that it would be better to already take a facility that's already in the community of these women. And so a lot of this stuff has to be done once I get there. There's no online application to get a building in the Ng'ombe slum. Pretty much when I move there it's just going to be go, go, go to arrange all these appointments with the government, to look, seek out these buildings, to find the equipment that I need.